This post is a continuation of my previous post in which I gave a picture of my long-term cooperation with Jenny Hughes who sadly passed away last Sunday. When discussing different themes I mentioned that I would get back to the TACCLE projects in a separate post. This was not only due to the fact that the TACCLE projects have been the flagship projects in Jenny’s career and their continuation proves that they have been a success story.
However important this may be alone, another argument is that I have authentic video material in which Jenny reflects the experience earlier TACCLE projects and outlines her plans for forthcoming projects. This discussion was recorded for another European project (Co-op PBL in VET) in 2012 but it was reused and republished couple of times in the context of the Learning Layers project. The introductory text below is based on my earlier blog of April this year. Let us give the floor for Jenny with this adapted text and the videos!

The series of TACCLE projects started with the first TACCLE project (Teachers’ Aids on Creating Content for Learning Environments) that worked in 2008 and 2009. It prepared an E-learning handbook to support the e-learning competences of  classroom teachers. In the Taccle2 project the work was differentiated to address different subject areas and alongside them the primary education teachers. In the Taccle3 the emphasis on teaching programming and coding for school children.

The  project Taccle4 focuses on developing materials and media to support continuing professional development of teachers and trainers in different educational sectors. The most recent project – Taccle5 – focuses primarily on the field of vocational education and training (VET). As the following two interviews were recorded already in 2012, so the it was not quite clear, in what order the successor projects would come up, but the vision was clear – this work merits to be continued.

And the story goes on …

As I have indicated above, the series of Taccle project was continued to a somewhat different direction than anticipated in the video interview above. The next theme (and target group) to be picked up after the subject teachers in Taccle2 pointed out to be teaching coding in primary schools (Taccle 3). This was a clear response to new educational priorities at European and national levels. The theme ‘continuing professional development of teachers’ (Taccle4) was an urgent need because the resources of Taccle partners were not sufficient to meet the demand for Taccle courses. And finally, the field of VET was taken up in the Taccle5 project.

As I have said it earlier, we have lost Jenny but we have learned a lot of her and we can work further in the same spirit.

Last Sunday we got from Graham Attwell the sad news: Jenny Hughes has passed away. As we know it, Graham is a long-time friend of Jenny over decades. In his blog Graham has already given us a picture what all Jenny has been up to during the years they have known each other (see Graham’s recent blog post). I have also known Jenny and Graham quite some time – our cooperation dates back to the year 1996 when I started monitoring EU-funded cooperation projects as a project manager of Cedefop (European Centre for the Development of Vocational Training). Little did we anticipate, what all we would experience together in the years to come and what kind of initiatives we could bring forward. Below I try to cover some of the main themes with which we have worked together in the field of vocational education end training (VET). In this context I will try to give a picture, how Jenny has contributed to European networking and community-development through all these years. 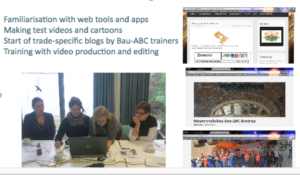 The first time I met Jenny (and also Graham) in Bremen in January 1996 in the kick-off meeting of the European cooperation project “Europrof”. The project was initiated by Institut Technik & Bildung (ITB), University of Bremen, but they chose to employ Graham as the coordinator. Jenny was representing the UK (Welsh) partner organisation. I was representing Cedefop – as an additional accompanying researcher. The aim of the project was to shape a new integrative framework for VET professionals – to overcome the divide between teachers (in school-based education) and trainers (in workplace-based training). The conceptual starting point inspired many European colleagues to join in at a later stage – as affiliated expert partners. However, the project had difficulties in working its way forward from a critical ‘state of the art analysis’ to a realistic change agenda that could be adjusted to different VET cultures. Yet, the work in the Europrof workshops prepared the grounds for a Europe-wide ‘invisible college’ and community-building process that was continued in other projects. In the beginning phase I remember that Jenny was critical about the ‘European English’ terminology that we (non-native English speakers) were using. It took some time for us to understand that we were not disagreeing on the underlying ideas but instead we were not aware of the connotative meanings in British English – that made our message weaker or diluted it altogether. Once we understood this, we were happy to work with Jenny on our side.

The Europrof project had tried to outline an integrative change agenda for promoting education and training for new VET professionals (covering the school-based and workplace-based VET). The successor projects tried to develop a differentiated approach – addressing teachers and trainers in VET as different target groups. The TTplus project (2006 – 2008) was initiated by Graham (now representing Pontydysgu and bringing Jenny with him). I joined this project as a freshman in ITB, based in Bremen. In this project we looked at the instances of change and interests that we could trace in different countries – in order to draw common conclusions. In this project Jenny provided insights into the training practices in Welsh organisations and outlined a framework for continuing professional development (for countries that did not have strong established frameworks at place).

A third phase of such European cooperation took shape in the European Consultation seminars 2007 -2008. The European Commission had decided to launch a consultation process based on six ‘regional’ workshops involving EU Member States and EFTA cooperation partners. The workshops had the task to bring different stakeholders to joint discussion on the role of European policies in promoting the professionalisation of teachers and trainers in VET. The project was led by ITB and supported by Pontydysgu. In the light of the difficulties that we had experienced in previous projects it was of vital importance that Jenny was able to shape a set of interactive workshops that kept the participants busy in common discussion instead of getting stuck with institutional and systemic differences.

Here some of the key points of this workshop concept:

During the workshops the participants worked mostly in mixed groups and language support was provided on demand. Also, at different phases of the process that participants changed groups. In this way the workshop stimulated cross-cultural dialogue and knowledge sharing on key issues and emerging initiatives. The participants emphasised the value of such process and hoped that it would be continued. Unfortunately the Commission services were expecting the process to deliver a Common European framework that would make such exchanges gradually redundant.

From ‘distance learning’ and ‘e-learning’ to the TACCLE projects

Another key theme for Jenny has been the promotion of teachers’ and trainers’ competences in e-learning – remote learning, open distance learning, multimedia learning, e-learning, technology-enhanced learning – whatever it has been called at different times. The major flagship projects in this context have been the TACCLE projects (I will get back to this in my next blog) and the related TACCLE courses. In these projects and in the supporting courses Jenny had the chance to shape handbooks, web-based support materials and workshops that brought the e-learning competences ‘home’ to the work of different teachers and trainers. As a personal memory I can refer to the Multimedia Training workshops that Pontydysgu and ITB organised together for the full-time trainers of the training centre Bau-ABC Rostrup in Germany. The lively approach that Jenny radiated throughout the training made the construction sector trainers do their best to get something useful for them in their own work. At a later phase of the Learning Layers project these pioneering trainers served us the champions in introducing the digital toolset Learning Toolbox to their training. And later on they have served as peer tutors in their own organisation and multipliers in a wider context.

One important aspect in Jenny’s career has been her role in European networks and community-building processes. She may not have pushed herself into the representative positions but yet her contribution has been vital. I still remember the start of the European “Forum” network that was launched in 1995 as a ‘learning community’ for European researcher. This network tried to avoid premature institutionalisation. Instead, it developed a culture of regular thematic workshops – and included specific workshops for emerging researchers. Gradually, it became necessary to apply for funding and to develop a formalised structure for thematic knowledge development – and in this way the project-specific goals for producing publications in each work package took over the process dynamic. During this development Jenny was trying to maintain the culture of ‘learning community’ and resist the atomisation of the network.

Throughout her career Jenny has been remembered as an advocate of ‘real life wisdom’. She took seriously the challenges of academic knowledge development but at the same time she always work together with practitioners and supported their development. We have lost Jenny but her legacy inspires us from now on.